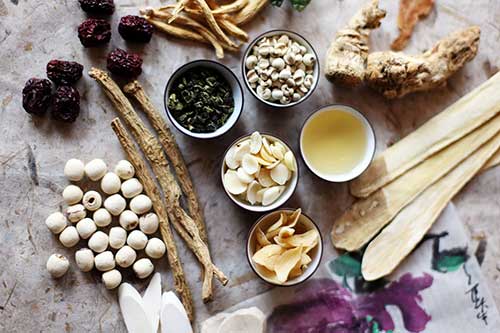 What are adaptogens and why are people so into them?

So what are adaptogens herbs, exactly? You’ve probably heard about them on Dr. Oz, you’ve read about them in health magazines, you’ve heard friends taking them, popping up everywhere from juice bars to lifestyle blogs. A buzzword in the wellness world!

First and foremost let’s begin by saying; Adaptogens are not a Western concept. The term “Adaptogen” comes from Dr. Nikolai Lazarev, a Russian scientist who first coined in 1947.

Adaptogens are substances either amino acids or a combination of vitamins and herbs that help the body and mind adapt and cope with occasional stressors while promoting an overall sense of relaxation. In other words, they modulate your response to stress whether it’s external stress, such as environmental toxins or internal stress, such as anxiety, fear, insomnia, etc. In Ayurveda which is (Eastern wisdom healing tradition) herbs are more popular such as Ashwagandha, Astragalus, Indian Gooseberry, etc.. In the West Amino acids like L- Theanine etc.

They are very popular and are often marketed with far-reaching health claims such as increased longevity, libido, and overall well-being.

According to Dr. Brenda Powell, co-medical director of the Center for Integrative and Lifestyle Medicine at the Cleveland Clinic’s Wellness Institute.

Each one claims to do something a little different, but on the whole, “adaptogens help your body handle stress“They’re meant to bring us back to the middle.”

What are the best adaptogenic herbs?

Each adaptogen has a slightly different function, so the best one for you depends on the specific ailment you’re experiencing, Powell says. Here are some common adaptogens and what they claim to be good for.

How do you add adaptogens to your diet?

If you’re looking for a straight dose of herbs, you can sip adaptogen teas or combine tinctures with water. To add adaptogens to the foods you’re already eating, you can buy the pre-mixed powder to spice up everything from smoothies to soups to salad dressings.

What about adaptogen supplements?

Some adaptogens can be taken as capsules. Just be sure you know what you’re getting, Powell cautions. “A lot of supplement companies put small amounts of this and that in a pill,” she says. “I think they are just assuming or wishing for a synergistic effect.”

Do adaptogens have side effects?

You should talk to your doctor before adding adaptogens to your diet or routine. A 2018 study found that common herbal supplements can interact negatively with prescription medications, and many people don’t tell their doctors which over-the-counter drugs and supplements they’re taking.

While it’s probably safe for most people to take adaptogens, Powell says doing so maybe more of a bandage than a cure. “People are basically wanting to take these adaptogens all the time for their chronic stress that they’re not managing otherwise,” Powell says. While “it’s easier to take a pill than change your lifestyle,” Powell says getting at the root cause of stress is healthier in the long run.

Mashk welcomes you to visit our social media platforms to share your comments.